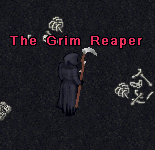 The Grim Reaper is the Special Halloween Peerless!

In order to fight The Grim Reaper, it require the Key: A Wretched Mass of Soul! This key is obtained by doing the Quest - A Collection of Souls offered by the NPC Quest Giver - Farley The Mad Gypsy Mage! He is located in the Main Area, North West at the Gypsy Caravan!

The Grim Reaper have the ability to spawn several Undead Monsters to help him defeat the group of Players who attack him!
- Around 35-40% (#x Skeleton, #x Wraith and others..)
- Around 1-2% (2x Skeleton Dragon, 3x Rotting Corpse, #x Skeleton Knight, #x Skeleton)